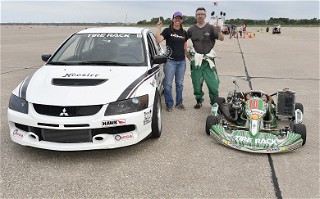 Lincoln, Neb. (Sept. 4, 2016) – In life a little rain must fall.  And boy howdy was that the case Saturday afternoon during opening day of competition for the Tire Rack ProSolo Finale at Lincoln Airpark in Lincoln, Nebraska.  The rain came pouring down late in the day, and it arrived in buckets, leaving a brand-new lake 5-inches deep in places along the southern portion of Lincoln Airpark’s taxiways.

As a result of the torrential downpour, afternoon runs Saturday were cancelled, which resulted in plenty of additional action Sunday as class runs continued in haste.  Thankfully, Sunday was devoid of rain and puffy clouds ruled the heavens, carried by stiff winds every now and again.

In Super Street, Ken Motonishi held the lead both days in a Porsche 911 GT3, claiming a .426-second win over Patrick Salerno in a similar vehicle.  In E Street, Paul Brown piloted a Toyota MR2 to victory over Eric Peterson in a similar car by only .119 second.  And the F Street battle went to Ryan Otis’ Chevy Camaro who bested Courtney Cormier’s Camaro SS by .147 second.  Then in Super Street R, a .107-second margin of victory went to Brian Peters over Sam Strano, both driving Chevrolet Corvettes in the 16-competitor field.

Not to be outdone, the Street Touring Ultra Class was decided by only .015 second with Martin Kriz in a Subaru Impreza beating out Bryan Heitkotter’s Nissan 350Z.  The 15-driver Street Touring Roadster group also saw a good battle up top with James Yom in a Honda S2000 ultimately taking victory by .269 second over the Mazda MX-5 of William Koscielny.  The winning margin was greater in Street Touring Xtreme, but Gordon Maciulewicz did a great job with his BMW 128i to generate a .684-second victory in the 22-driver field, with Kyle Herbst finishing second as co-driver of the same vehicle.  Then in Street Touring Sport, Kinch Reindl beat out 15 others to take the win in his Honda Civic Si by .383 second over Jeff Wong’s Honda CRX Si.

The Ladies classes saw some extremely tight competition over the two days.  In Ladies Class 3, the margin of victory in the 16-driver field was a mere .079 second, with Annie Gill winning in a Scion FR-S over Tasha Mikko in her Mitsubishi Lancer Evo.  Ladies Class 1 was decided by just .180 second as Christine Grice’s Mitsubishi Lancer Evo won out over Shelly Monfort driving a BMW 330Ci.  The 17-competitor Ladies Class 2 was close, too, as Jordan Towns in a Subaru WRX triumphed by .269 second over Julie Heaton driving a similar vehicle.

After class competition was done, the grounds fell silent for a bit Sunday with only the snapping of flags to be heard as the wind picked up and competitors waited to hear who would make the Challenges.  Soon enough, however, the Ladies Challenge began.

Ladies Class 1 winner Christine Grice found herself in the Final after getting the better of Laura Harbour, Tamra Hunt and Annie Gill in that order.  Facing Grice was Shelly Monfort who arrived at the Final after wins over Crissy Weaver, Tasha Mikko and Jordan Towns.  When it was said and done, Grice claimed the Ladies Challenge victory.  Grice also claimed the Fletcher Cup, to boot, for becoming the ProSolo Ladies Challenge Points Champion.  Her margin of victory was a single point over Jordan Towns.

“The weather tried to play a mean trick on me yesterday with the torrential downpour, but I stuck it out and ran the race that I wanted,” Grice said.  “And winning the Fletcher Cup is amazing.  When they first instituted the award it was the year after I last won the championship.  So it’s great to win it now.”

Ending the Tire Rack ProSolo season was the final Super Challenge of the year.  It was Sam Strano who faced Paul Russell, with both men looking to win the Finale Super Challenge and ProSolo Super Challenge Points Championship at the same time.  Strano arrived in the Final by beating Joe Tharpe, Ryan Otis, Michael Lane and Eric Campbell.  Russell earned his spot by getting the best of Eric Simmons, Courtney Cormie, Lance Keeley and Brian Peters.  In the end it was Russell that stood beside his Honda-powered Tony Kart as king of the Tire Rack SCCA ProSolo world.

“I went with my standard grip setup and it worked well.  So I kept it through the Challenge and it worked,” Russell said.  “It feels really good to win the ProSolo Points Championship again.  The last time I won was in 2014 and it’s not an easy thing to do.  I didn’t expect to achieve it this year.  I mean, I was in thirteenth place coming into this weekend.  I needed a whole lot of luck.”

Strano, however, walked away with his own reward for the weekend.  He took home the Green Light Award for his contributions to ProSolo.