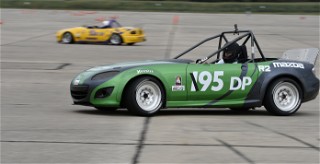 TOPEKA, Kan. (January 25, 2017) – Tire Rack SCCA® Solo events had been living a charmed life for several years when it comes to the old runways of El Toro Airbase at what is now the Orange County Great Park. Unfortunately, it appears luck has run out as Howard Duncan, Sr. Director of SCCA Rally/Solo, announced today that what was to be the 3rd Annual Last El Toro ProSolo must be cancelled.

In its place, Tire Rack SCCA ProSolo organizers have secured a March 31-April 2 date for ProSolo competitors at Auto Club Speedway in Fontana, California -- located about an hour’s drive northeast of the original Orange County venue. The original date for the annual visit to Southern California had to be adjusted as the Speedway was previously booked.

“Due to pending land development, a formal contract was not offered for use of the Orange County site this year. Instead, a verbal agreement, which could be rescinded at any time, was offered to use a diminished amount of space,” Duncan said. “This was obviously not a situation we could accept, especially for our members traveling in from out of town. So, the decision was made to swap dates and return to Auto Club Speedway, which ProSolo last visited almost a decade ago.”

The new ProSolo calendar is a 10-event, regular season schedule -- running March to August -- that leads to the Tire Rack ProSolo Finale in early September. The 2017 schedule is as follows:

During ProSolo events, drivers face off, side-by-side, at a “Christmas Tree” start before launching down a straightaway and into mirror image autocross courses. Three heats of Class competition give drivers 12 total runs, six on each course. Like other Solo competitions, runs are timed to 1/1000th of a second and knocking a cone down means a two-second penalty added to a time.