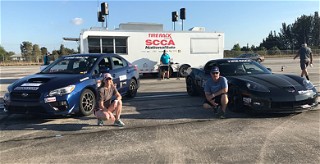 ProSolo is one part autocross and one part drag racing, resulting in a truly unique and exciting Solo experience. The event is run utilizing a pair of mirror-image courses arranged so that drivers start side-by-side. A ‘Christmas Tree’ borrowed from the drag racing world directs drivers when to leave the line, with staggered starts to equalize different car classes.

Competition on Saturday and Sunday morning utilizes the tree, but the driver with the fastest lap on each course is deemed the winner much like a normal autocross. On Sunday afternoon, drivers are seeded into a 32-car bracket based on margin of victory during the class-based competition. Once seeded, drivers go head-to-head with one run on each course to determine the winner of each matchup. The last driver standing in each bracket is the winner.

The first run group of Saturday featured the Ladies Classes. After final runs on Sunday, Laura Campbell claimed a dominant win in a bumped L1 class. In very tight L2 action, Chris Peterson bested Jennifer Bedell by just .119 of a second for the class win.

A tight A Street battle from Saturday carried over to Sunday as Laurence Casey was able to improve on both sides of the course to take the win over Jason Ruggles, both in Chevrolet Corvette Z06s.

In the Super Challenge, Casey started with a bye in the first round, but faced strong competition from the winners of Street Modified (Tim White), B Street Prepared (Gregory Hahn), Bump 1 (Dennis Sparks), and finally Johnathan Roberts, in his E Street Mazda Miata, in the final round of the Super Challenge. After five rounds, Casey emerged the victor for the first Super Challenge Win of the 2017 season.

Despite the class results, Jennifer Bedell defeated Campbell in the first round of the Ladies Challenge. In similar fashion, Jordan Towns defeated Peterson on that side of the bracket. Towns claimed the victory in the final round to take the first Ladies Challenge win of the season.

The Bonus Challenge brought together eight drivers to find “the best of the rest.” Courtney Cormier coned away his fastest run of the weekend, costing him the F Street win in a Chevrolet Camaro SS, but made the Bonus Challenge, seeded first. In the final round, he defeated Doug Francis, from B Street, for the win.

Full results can be found at the Tire Rack Ft. Myers ProSolo webpage.  Next on the SCCA ProSolo calendar is the March 31-April 2 Tire Rack Fontana ProSolo in Fontana, California.  For additional information on Tire Rack SCCA Solo, visit http://www.scca.com/solo.