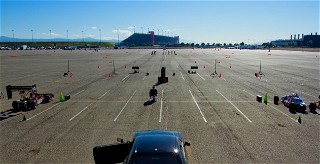 TOPEKA, Kan. (April 4, 2017) – The sun has set on a tight weekend of racing in sunny southern California at the 2017 Tire Rack Fontana ProSolo® at Auto Club Speedway. With 226 competitors and 80 trophy positions over 26 classes, there was excitement to be had all weekend. There were aliens running on Nexen tires, big smoky burnouts from American muscle, and the smallest gap between trophy positions was three milliseconds.

A Street Prepared driver Tom Berry claimed the Bump 4 win and earned top qualifier honors in the Super Challenge, and was able to triumph through three rounds before being knocked out by Sammy Valafar in his E Street Mazda Miata. Anthony Porta was able to rise to the Challenge Finale in his BSP Mazda Miata through consistency, and some fortunate red lights from his competition. In the end, Valafar triumphed over Porta. In the third-place runoff, Paul Russell succeeded over Berry in his Tony Kart K Modified.

Christine Grice claimed top qualifier honors in the Ladies Challenge with her L1 victory, but was quickly knocked out by Nicole Wong from L3. After losing the L3 lead on Sunday morning, Annie Gill sought redemption in the Challenge and beat fellow L3 competitor Kate Fisher in the final. Meredith Brown of L2 won the third-place runoff against Wong.

Before the Challenges took place, class competition brought the best drivers to the forefront, determining who would earn a spot in the Challenge Brackets. B-Street featured a different car in each trophy position, with all finishing within one second of each other. Navid Kahangi in his Ford Focus RS finished in fourth place and stood on his Saturday runs. In third, Kyle Williams in his Corvette dropped time, but was unable to fend off second-place finisher Alex Muresan who leap frogged Kahangi and Williams with a .57 pickup on his Sunday runs. Top spot went to Ryan Clark in his Porsche Cayman S, coming all the way from Calgary, Alberta.

One of the largest classes this weekend was Street Touring Roadster with 19 drivers. James Yom claimed a come-from-behind win by cleaning up his coned runs to put down some fast laps. Ken Motonishi, who led most of the event, was just 47 thousandths behind in second. Ron Bauer, standing on an earlier right-side run, threw down a fast final left-side to move up three positions ahead of Matt Ales who finished fourth. In fifth was Jeff Cawthorne followed closely by Kevin Dietz who was .169-second behind.

Another huge class, Street Touring Extreme, was won by Chris Thorpe who proved AWD is still alive and well in STX with his VW Golf R. Terence Chang moved up to second from seventh place, with Jeff Wong in third only 44 thousandths behind him. Course designer Jonathan Lugod placed fourth .061-second behind Wong, and Manfred Reysser was fifth .02-second behind Lugod. So, third through fifth was separated by less than one tenth of a second! In the final trophy position was Brandon Porambo in the Berry’s 24-year-old BMW 325is.

L3 witnessed a shakeup in the 12-driver field as Mina Ingraham came from behind to secure the win by leapfrogging over day-one leaders Annie Gill and Nicole Wong. Ingraham went faster on both sides Sunday to beat Gill by nearly one second, with Kate Fisher moving up to third and Wong sliding down to fourth.

On another lot at the very large speedway property, a second autocross geared toward muscle cars was going on. In an effort to involve those driver in ProSolo, organizers allowed the group to compete and make runs intermittently throughout the day outside of regular ProSolo CAM competition. To welcome the outside group, event organizers established a special CAM class, called Index Class 1, for the guests. After all the CAM results were merged, it was CalClub’s Chad Ryker in a CAM-T ‘68 Camaro who earned the win.

Photo: Kencey Christopher and Mari Clements battle on Day 1 of the Tire Rack ProSolo in Fontana.

Story and Photo by: Anthony Porta