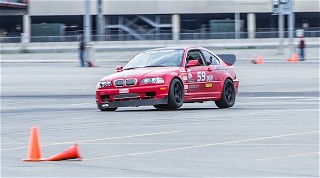 As we all get ready to head up to New Jersey in a couple days, here's what to look out for.

Super Street is pretty well stacked, with Corey Ridgick bringing out a GT-R to see if it can hang with GJ Dixon at a ProSolo.

In A Street, Laurence Casey is 2 for 2 on ProSolo wins this year, but will have to face off against Evan Schickel and Mark Daddio, so this will be a battle for the ages, with a total of 21 people in class.

With Rachel Baker moving into open class in her Cayman, she's ready to put the beatdown on the boys in B Street.

Of course, Super Street R is quite a battle as always. Missing will be Sam Strano, having moved to John Vitamvas' DSP BMW, but a LOT of new faces with serious talent, along with several National Champions, if you can only watch one class run, SSR is the one to make time for.

STR has, as far as I know, a pretty close to record entry for a Pro, with 33 drivers! With that many drivers, any weather is likely to be a big impact between those running early in a given heat, and those running later, so this could be crazy. Brian Karwan is probably the standout driver of the bunch, but look out for Shane Chinonn-Rhoden to be the dark horse, especially if there aren't any walloms!

DSP will be exceptionally crazy, with Strano making his entry into the class, John Vitamvas, Eric Campbell, and Alex Shchipkov.

As for the ladies, look for an awesome battle in L1 between Shelly Monfort, Tamra Hunt, and Learic Cramer. Laura Campbell is coming up from the south to see what'll shake out in L3.

As an aside, I'd like to correct an error in my last article. I had originally made a statement that Meadowlands does not smell as terrible as the rest of New Jersey. I stand corrected, it does, in fact, smell exactly the same as the rest of the state.