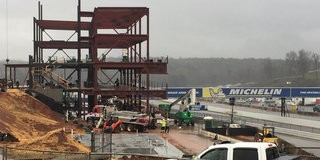 A new day is dawning at Road Atlanta … um, we mean Michelin Raceway Road Atlanta. Recognized as one of the world’s great road courses, the multi-purpose facility situated on 750 acres in the rolling hills of Northeast Georgia is writing a new page in its history as Michelin becomes the first-ever entitlement partner of the track.

According to reports, this is the first time globally that Michelin will have naming rights with a race circuit. And to go along with the new name, the facility will soon have a new look because the track’s partnership with Michelin comes with construction of a grandiose Michelin Tower replacing the old control tower along the front straight.

Demolition of the old control tower already occurred, and girders are currently in place forming the skeletal frame from which a state-of-the-art, four-story building will emerge. Slated for completion before year’s end,  plans for the new building include a 300-person hospitality/event space on the first floor, a media center and broadcast booths on the second floor, six hospitality suites on the third floor, and four hospitality suites and Race Control on the fourth floor. There will even be a fully-equipped catering kitchen built into the structure and rooftop viewing deck for spectating.

Bob Hudson, Region Executive for SCCA’s Atlanta Region -- which is host of this weekend’s Hoosier Super Tour races -- noted that his Region was working events nearly 50 years ago when the original control tower was being constructed back in the ‘70s at Road Atlanta.

“It’s kind of funny to realize the Atlanta Region has outlasted an iconic building,” Hudson joked. “The Atlanta Region conducts several events at Road Atlanta each year, and it’s absolutely fabulous having a world-class circuit in our backyard. We’re looking forward to the modern Michelin Tower and the elevators that come with the new building! Climbing the steps of the old control tower was good exercise, but that novelty wore thin after two or three trips up to Race Control.

“There will be some challenges this weekend as volunteers work from temporary structures,” Hudson added, “but the Atlanta Region and SCCA volunteers know how to overcome hurdles and triumph over adversity to pull off a great event. It’s a small price to pay for a brand-new building the Atlanta Region can work from for another 50 or more years.”

First raced on in 1970, the challenging 2.54-mile, 12-turn Michelin Raceway Road Atlanta has hosted numerous amateur and professional events over the years. But this year is the first time the venue has hosted a Hoosier Racing Tire SCCA Super Tour.  Be sure to follow all the action all weekend with live timing/scoring, static cameras and Super Tour Radio presented by Hoosier Racing Tire at www.scca.com/live.