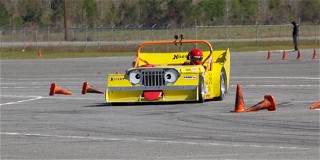 Putting on an autocross event, at its core, involves timing cars as they run point to point. Within that box, however, there is a lot of room for creativity.

Take the Dixie Region, for example. This December 4-6, the Region will host the 33rd Annual Allies vs. Axis event at South Georgia Motorsports Park in Adel, Georgia. This year’s version of the event, which always falls on the closest Sunday to Pearl Harbor Day on December 5, doubles as the 2020 season finale for the Tire Rack Championship Tour schedule.

So what’s this Allies vs. Axis thing all about? Simply, it’s a normal autocross, except the field is split into teams. The Allies consist of American and British cars; The Axis, naturally, are German and Japanese vehicles. Have an Italian car? You’ll start on the Axis side, but get moved over to the Allies after lunch. It’s factually accurate (ish)!

Really, the Region has used this creativity to create a buzz at a time of year when traditionally, there might be other things on competitors mind, often with an effort to help a local charity.

As evidenced by the trophies, this is an event that doesn’t take itself too seriously. There’s annually a Japanese sneak attack at 7:53 a.m., and the Swedish cars have been left to the side to sell parts to both teams. You’ll also notice there hasn’t been any official declaration on how points are kept for the “team competition.” Let’s just say, after 32 years of the event, the Axis is still waiting to win.

More information on the Dixie Region’s Axis and Allies event, now a Champ Tour, can be found here.

Does your Region have a unique take on an event? Let us know and it might be featured here on SCCA.com!