SportsCar Feature: A Home In Solo 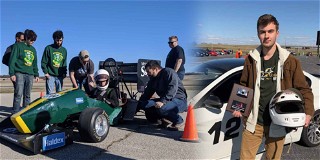 This article first appeared in the June, 2020 edition of SportsCar Magazine. Everyone can read the current and past editions of SportCar digitally here. To become an SCCA member and get SportsCar mailed to your home address monthly in addition to the digital editions, click here.

For 19-year-old Mitchell Coughran, Street Survival and autocross are only the beginning

It doesn’t take long in any conversation with St. Louis Region’s Mitchell Coughran to recognize not only the enthusiasm of the 19-year-old university student for motorsports, but also the importance of encouraging someone who expresses an interest in motorsports to take the next step.

Now already a Regional Solo champion in two classes, an autocrosser ready to lend a hand at local events, a Tire Rack Street Survival instructor, and a fan of Track Night in America Driven by Tire Rack, Mitchell also is a student and SAE Formula Electric team member at the Missouri University of Science and Technology, where he is studying aerospace engineering. Even in the midst of the current coronavirus pandemic and its effects on everyday life, including motorsports, he is a busy young man.

An SCCA member since 2015, Mitchell earned the St. Louis Region’s Solo novice award in 2016, alongside a first-place title in D Street Prepared. In 2017, he recorded another first in DSP and followed that in 2018 with a first in Street Mod. He moved to F Street last year, where he recorded a second-place finish for the year and was also named the Region’s most improved driver. Along the way, he has become a driver for Missouri University of Science and Technology’s SAE Formula Electric team as well as the team’s chief technical officer and its head of aerodynamics.

“Mitchell represents our younger generation of autocrossers with enthusiasm,” observes St. Louis Region Solo chair Todd Benne. “Whether he is on course, driving, providing help to fellow competitors, or handling Timing and Scoring duties, he always has a positive attitude. His energy and dedication to the sport is admirable. We are fortunate to have him in our program.”

For Mitchell, it all began with sim racing and a Street Survival course.

“I became interested in motorsports at age 14 and attended a Tire Rack Street Survival course shortly after I turned 15 and got my first car,” he explains. “My parents had never been car enthusiasts, but my father used to be relatively interested. My [Street Survival] instructor referred me to SCCA Solo and asked if I was interested. My parents agreed to try it with me as a family bonding activity, and we were all immediately hooked. It just spiraled from there.”

The “we,” by the way, includes not only Mom and Dad, Mitchell says, but now also his 17-year-old twin sisters, Olivia and Adelle, who, like Mitchell, have begun a Solo career.

“None of this would’ve happened without my parents supporting me and helping make me competitive,” Mitchell says. “And without the referral of my Street Survival instructor, Thomas Sotiropoulos, I may not have ever found the SCCA Solo program.”

Regarding Street Survival, Mitchell calls the program “fantastic,” adding that in many ways, Street Survival and autocross complement one another. “Street Survival gave me a taste of car control, but Solo really allowed me to make the transition to learning how to actually have control over the car – not just feeling it out, but going over and learning where the limit is when you get stuck in a sticky situation, whether you’re on course or on the road,” he explains.

Serving as a Street Survival instructor is rewarding also, Mitchell adds, even though balancing school, autocross, and Street Survival duties means that he’s hasn’t been able to contribute as much to the program as he would like.

“A lot of the participants are 15, and they don’t have much driving experience,” he says about the Street Survival students he’s mentored, “and you are kind of throwing them in the deep end. They start off freaked out about it, and then, by the end of the day, you see their confidence shift. By the end, they’re running the lines, and they’re confident in it. It’s cool to see how their confidence changes about just being on the road in general.”

And Solo? Well, there’s something about the finesse of the discipline and the room to grow in performance driving skills that has captivated him, Mitchell says.

“No matter how good you are, you can be better,” he says. “That, and every car is a different challenge. Mainly, there’s no better place to learn the challenge of handling a car skillfully at – and past – the limit without severe consequences than at a Solo event.”

Autocross, he adds, “has given me a place to grow my driving skills more than anywhere else simply because no matter how good or bad you are, there are people supporting you who you can learn from; there are people of a similar skill level you can compete against, and there are people you can help to grow more comfortable and faster on course. In motorsports as a whole, the SCCA has given me a hugely supportive and rewarding group of people with similar interests.”

His SCCA activities also complement his university work, Mitchell notes, including his participation in his school’s SAE Formula Electric program. “Rolla,” local shorthand for the university, is definitely a hard school in terms of academics, not in the least because he is studying aerospace engineering, Mitchell says, but it offers benefits in addition to providing a good education, too. There is not only the SAE program but also an automotive performance club and a strong car culture, which means he’s surrounded by likeminded people even when he’s not participating in SCCA events.

“One other benefit of being a part of the SCCA and motorsports as a whole is the connections it opens up,” he says. “Not only have I met my closest friends at car events, but my passion for motorsports has opened up career opportunities with people I’ve met through Formula Electric competitions and employer/sponsor meet-and-greets, and even at normal motorsports events.”

Honestly, he adds, motorsports is one of the most satisfying hobbies anyone can take part in. “Sometimes cars can seem to become more of a lifestyle,” he says, adding, “The advantage of this is that anyone who shares the interest is an instant friend.”

In terms of advice to someone new to the sport, Mitchell recommends going through the learning curve on course in a safe environment. “People new to the sport overestimate how much they are in control of their vehicle at the limit,” he explains.

“However, this shouldn’t scare someone away,” he adds, “because if you do decide to jump into motorsports, you’ll become a part of one of the best groups of people there is, and you’ll experience some of the most rewarding moments in your life when you learn something new about driving and doing it right.”