Concept Test Success at the FIRM 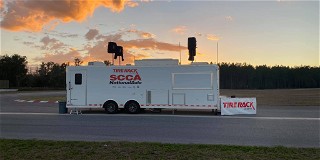 This past weekend, a ProSolo 1 concept-test event was held at the Florida International Rally & Motorsport Park in Starke, FL. Using the West loop of the road course, the goal was to test the feasibility of a ProSolo-style event using only one course, instead of the traditional two.

Because this event was primarily intended to serve as a test, operations were a bit more casual than the average national event. During individual heats, cars were brought into the staging area on a first come, first serve basis. Just like at a traditional ProSolo, though, groups of eight to ten cars were brought into staging, keeping the time between runs short and the pace brisk.

Despite intermittent hard rain, 92 drivers competed in the single-day contest. Although a Challenge was planned using a format similar to NASCAR or Formula 1 qualifying sessions, it had to be cancelled due to weather delays. This format will be tested at a future event.

Some software improvements will be needed to implement the concept into the normal National Solo season, but the FIRM event proved the feasibility of the concept moving forward.

From a competition perspective, drivers had three looks at the course during a morning session, followed by another three looks in the afternoon. Each driver’s best time from each session was combined to create their overall score.

The nine-driver C Street class was very diverse with the now-normal ND2 Mazda MX-5s, but also a slew of Honda S2000s and a token BMW Z4. The MX-5 reined supreme at the hands of Rick Cone, taking the win by 1.341 second over a pair of S2000s piloted by Don Johnson and Mark Cather respectively.

The indexed Classic American Muscle class was the largest of the event with 14 drivers. All five trophy positions finished within two seconds of each other after the two sessions with James Bell improving from fourth after the morning to take the win. Steve Waters also found time in the afternoon to improve from third to second. The final three trophy positions were claimed by Jon Nwanagu, Joshua Sightler and Mark Burt.

Ladies 2 brought a variety of street-tire clad cars together for competition. Laura Marcus held a scant lead in the morning but stretched it to over 5.5 seconds in the afternoon to take the win over Angela Carlascio. Laura Johnson claimed the third and final trophy, just 0.485 second behind Carlascio.

This event would not have been possible without the support of the Central Florida Region Solo team. Additionally, the CFR RallyCrossers were using the other side of the facility concurrently, showing the versatility of the site and ability of the programs to collaborate.

Photo Courtesy of The FIRM