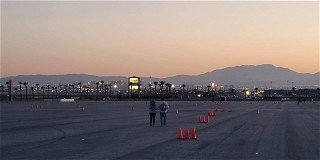 Las Vegas Motor Speedway was the site for this past weekend’s Tire Rack Las Vegas Champ Tour, an event hosted by SCCA’s Las Vegas Region. The course included plenty of slaloms and sweepers, presenting a tricky challenge for competitors. Those who produced class wins after two days of competition put on quite the display of driving talent.

The largest field of the weekend with 16 entries, B Street did not disappoint when it came to excitement. A trio of BMW M2s led the way with Andrew Kessel holding the top spot by 0.454 second over Jay Balducci after the first day of competition. Jason Bucki sat third only 0.071 second back from Balducci. Kessel expanded his gap only slightly Sunday to bring home the victory, and Balducci and Bucki held station for second and third.

E Street put on a show for onlookers Saturday and Sunday as a dozen competitors battled it out for victory. Dennis Hubbard, driving a 2004 Toyota MR2 Spyder, was hot Saturday and led the field with a 0.503 second gap back to the 1999 Mazda Miata of Peter Loney in second. Hubbard managed to expand that gap Sunday by about a tenth of a second to secure the win. Loney confidently claimed the runner-up spot over Edward Tsui who was co-driving the Toyota with Hubbard.

Street Touring Sport generated some controversy as day one leader Eric Stoltz, driving a 1992 Mazda Miata, had his times disallowed and was no longer in contention for the win. Craig Naylor inherited the lead in his 1995 Mazda Miata and went on to claim victory by 0.423 second over Stoltz’s co-driver, Darrell McVey. James Harnish finished third in a 1988 Honda CRX Si.

Weekend controversy continued with Street Touring Roadster (STR) as opening day leader Christopher Vreeland, in a 2019 Mazda MX-5 Miata, had his times disallowed. It was Matt Jones and his 2019 Mazda MX-5 Miata who moved to the top spot in STR and continued on to victory with a winning margin of 1.914 second. Nathan Witt, Vreeland’s co-driver, finished second followed by Joe Goeke’s 2016 Mazda MX- 5 Miata.

There was no controversy in Street Touring Xtreme, just some tight competition. Kate Fisher and her 2013 Scion FRS were out front Saturday with Jonathan Mudge giving chase in a similar car. Alex Paraskevas was third in a 2013 Subaru BRZ. On Sunday, Fisher's first run was dirty and thus left the door open. Paraskevas came out swinging and took over the top spot with a flyer of a first run. Fisher cleaned things up for her second run, but was still just a touch off Paraskevas’ pace. On her third run, Fisher was able to find even more time to nail down the win by 0.313 over Paraskevas. Mudge was a close third.

For CAM Challenge competition, CAM-S victory went to David Rock and his 2001 Chevrolet Corvette Z06. CAM-C was won by Jeff Wong in a 2020 Chevrolet Camaro SS, and James Eaton won CAM-T with a 1985 Ford Mustang.

The Tire Rack Championship Tour remains west of the Rockies for its next event taking place April 23-25 at Auto Club Speedway in Fontana, California. That weekend will include a Champ Tour event and imbedded CAM Challenge competition. Registration is open for action in Southern California, so sign up today before the entry cap is reached!