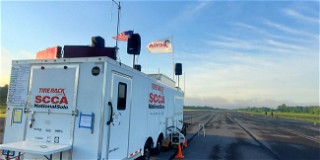 With a baker’s dozen of competitors, E Street (ES) was led after day one by the Toyota MR2 of Ed Lange with Gavin Williams, in another MR2, and the Mazda Miata of James Coulombe not far behind. But on his opening run Sunday, Williams leapt to the top spot and held that position to bring home victory in ES. Coulombe slotted up to finish second, and Rich Wayne jumped to third in another Toyota MR2 Spyder. The competition was very close, however, as the top six finishers were only separated by 0.692 second when runs were done.

The battle is H Street was tight, too. Caleb Pardus, in a Ford Fiesta ST, and Peter Ling, driving a Honda Accord, were separated by 0.069 seconds after three runs. But on Sunday, Pardus managed to pull away from the field finishing with a 1.681-second win. Ling locked down the runner-up spot, and Justin Chen came home third in a Honda Civic Sport Hatchback.

Onlookers needed a doubletake Sunday for D Street competition after Alex Piehl and Steve Matchett were separated by only 0.017 seconds Saturday. But on day two, Piehl just couldn’t get a clean run and dropped to third in the class. Matchett masterfully drove to victory, and Dave Potocki jumped up to second place. Honda Civic Type R vehicles were driven by each of the top three finishers.

Super Street R had Grant Reeve leading Saturday with a decent margin of 0.317 second in his Chevrolet Corvette Grand Sport. Cody Hunt’s Corvette was looking good and closing in on the leader during day two, but coned away his best run — which would’ve been good enough to take the lead. It was Reeve who won by 0.140 second over Hunt in the end. Matthew English, Hunt’s co-driver, finished third.

A fun fight broke out in Street Touring Roadster, with 18 drivers. Ryan Field held a scant lead of 0.013 second heading into Sunday, but Billy Davis ended up the winner by only 0.070 second. Field held on for the runner-up spot, and Ken Houseal claimed third. The top 14 finishers were all driving ND Mazda MX-5 Miatas.

The largest field of the weekend belonged to Street Touring Sport and its 20 drivers. In that class it was Rich DiMarco, in a Mazda Miata, who closed out the opening day with a half-second lead over the Honda Civic of Brian Levesque. Try as he might, Levesque couldn’t close the gap Sunday and DiMarco emerged with the victory. Brandon Dryer, in a Honda Civic Si, came home third.

A Full Holiday Weekend Coming Up

The penultimate Tire Rack Champ Tour of 2021 is next on the schedule as the Bristol Champ Tour takes place July 2-4 at Bristol Motor Speedway in Tennessee. Same place, same weekend, the Tire Rack SCCA ProSolo Series is back in action July 1-2 with the Bristol ProSolo, which includes a Tire Rack CAM Challenge Series Powered by SCCA element, too! Registration is open for these events, so reserve your spot now and get ready for an exciting Independence Day in Tennessee!