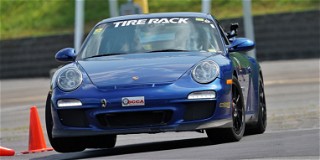 Just short of 300 SCCA autocrossers celebrated July 4th weekend together in Tennessee for the Tire Rack SCCA Bristol Champ Tour event held at Bristol Motor Speedway. It was the penultimate event on the 2021 Tire Rack Championship Tour calendar and a chance for people to hone cars and skills in advance of September’s Tire Rack Solo Nationals at Lincoln Airpark in Nebraska. Registration for Solo Nationals opens to EVERYONE beginning tomorrow – Wednesday, July 7 – at 3pm CDT!

The biggest field of the weekend belonged to E Street with a whopping 22 entries. Cory Barr, driving the only Mazdaspeed Miata in grid, was never really touched over two days and brought home the win by 1.718 second over the Toyota MR-2 Spyder of Eric Peterson. On her last run, Heidi Ellison jumped the Miata of fourth-place finisher Kerry Coughlin to claim third in another Spyder. Ellison’s co-driver, Rich Wayne, finished fifth; Spyder driver Paul Kozlak finished sixth; and Justin Crump wheeled his Miata well enough to grab the seventh and final trophy spot.

E Prepared produced a neat story this weekend as Ryan Huffman, driving an Acura RSX Type S at his first-ever Champ Tour, took the win. Huffman, who has been developing his car at local autocrosses for a little more than three years, had the lead on day one up to the third run. But Patrick Washburn wheeled the Honda Civic to edge him out by 0.001 second. On day two, Huffman fought back to take the win by 0.016 second over Washburn.

In B Street, Tony Chow too the BMW M2 straight to the lead in a field of 16 drivers at the end of Saturday. However, David Marcus and his Toyota Supra were hot on his tail. On Sunday, after second runs, Marcus closed the gap to only 0.021 second. On his third and final run, Chow went faster and ended up with a 0.202-second victory over Marcus. Gregory Shumaker finished third in a Chevrolet Camaro SS; Dean Moheet came fourth in another BMW M2; and Chow’s co-driver and car owner, Devin McCuen, finished in the final trophy position.

On Saturday, Steven Matchett led Alex Piehl in D Street by 0.002 second with both competitors in Honda Civic Type R cars. Piehl had been facing shifter issues that made his car pop out of gear, so he jumped into the Type R of Aditya Madhavan for his third run. For Sunday, Piehl ended up running with Myke Dziengel in his own Type R. The move did the trick as Piehl set a time everyone chased the rest of the day. Even though it took three different cars, Piehl took the win by 0.671 second over the Type R of Javier Reynoso. Third went to Dave Potocki, also in a Type R, and fourth was claimed by Dziengel. The fifth and final trophy position went to Mark Allen, sweeping the trophies for Type Rs.

Can you believe the 2021 Tire Rack SCCA Championship Tour season is about over? The last event of the year will take place this coming weekend, July 9-11, and it’s the Tire Rack Packwood Champ Tour at the old Hampton Mills facility in Packwood, Washington. If you can’t make it to that event but still crave SCCA Solo action, check out the Tire Rack SCCA ProSolo schedule that has a couple additional events scheduled in July. And of course, make sure you’re registered for the 2021 Tire Rack SCCA Solo Nationals taking place Sept. 6-10 at Lincoln Airpark in Nebraska.