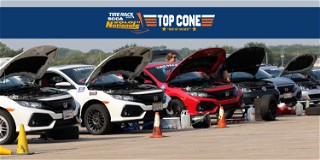 Drivers in 35 different car classes are competing Tuesday/Wednesday at the 48th running of the Tire Rack Solo Nationals Championship in Lincoln, Nebraska. After the first day of runs, several very tight battles are brewing.

In the 32-entrant GS class, Emery Seaton leads Ryan Finch by a slim margin of 0.026, and Ed Vogt is back in third only 0.077 off the lead — all three in Hondas. A story is unfolding in the 35-entrant CS field as 0.029 separates leader Mark Scroggs from Will King in second, and Rick Cone is third only 0.087 behind Scroggs — each of those drivers are wheeling 2019 Mazda Miatas.

Continuing the theme of closeness on the East Course, James Darden currently leads FSP in a 1986 Toyota Corolla GTS by 0.185 over the 1977 Volkswagen Rabbit driven by Jake Smilie in the 13-entry class. And in SSC, a class boasting 58 entries, Mason Herrick is ahead of Jimmy Vajdak by 0.257 with both competitors driving Scion FR-S cars. Only 0.044 behind Vajdak is Tony Savini in a Subaru BRZ.

While the STUL class only has five competitors, the battle up front is super-duper tight. As of Tuesday night, a pair of Nissan 350Zs were leading the field with Kati Bianchi ahead by a tiny 0.007 over Becca Nell. A slightly larger gap of 0.087 between first and second can be found in SSL as Crissy Hedderick, in a Chevrolet Corvette, leads the Porsche Cayman 718 GTS of Emma Adams. Sitting third another 0.087 behind Adams is Julie Woodbury in a Chevrolet Camaro.

Several other West Course class leaders have gaps of slightly more than a tenth-of-a-second on the competition. The difference between first and second in the 52-entry STS field is currently 0.119 as two Mazda Miatas battle it out, one driven by leader Eric Stoltz and the other by Rich DiMarco. Just 0.170 back from DiMarco is Adam Barber in a Honda CRX Si. And don’t sleep on the fight going on in SS with the Acura NSX of Tom O’Gorman currently atop the 36-entrant field by 0.131 over Ron Bauer in a Porsche GT4 machine. But the pressure in SS continues with another Porsche GT4 driven by Matthew Braun currently third only 0.057 behind Bauer, with James Yom only 0.021 off Braun in a Porsche GT3 car. That’s a measley 0.209 covering the top four runners in SS.

It's the ol’ switcheroo come Wednesday morning at 8 a.m. Central Time when Solo Nats rolls into day two of competition, and competitors swap courses for three more runs. By Wednesday evening, we’ll have our first set of 2021 Solo Nationals Champions.

A huge array of primo cars can be found at the Tire Rack Solo Nationals Championship. You’ve got a McLaren 620R, a Nissan GTR, Porsche GT3, a 1931 Ford Model A Deluxe…

Monday afternoon, the Rebels Auto Club of Lincoln pulled up and parked a fabulous range of collector and classic cars just outside the Tire Rack Event Center (TREC) tent. In the fall of 1955, 30 young men gathered to form the Rebels Car Club of Lincoln, and membership increased to better than 70 in only a few weeks. Today, the Rebels are still one of the most active Lincoln car clubs in operation, and they do more than just show off cars. In fact, the Rebels have lent a hand for several years working the practice course at Solo Nats so competitors could put more focus on car setup and driver practice.

There were about 50 fabulous vehicles on hand for the show Monday at Lincoln Airpark. Eyecatchers included a red and white 1957 Ford Fairlane 500, a black Ford Falcon that glittered in the bright sunlight, and a lime-green Chevy 3100 pickup from the 1950s. And believe it or not, the 1931 Ford Model A Deluxe 2-door was only the second-oldest vehicle on site. While there was some “discussion” amongst the car aficionados perusing the mechanical artwork, many believed a black 1929 Ford Model A Roadster pickup in attendance was likely the eldest amongst the gaggle.

The Rebels Auto Club is a super-friendly group that promotes the ownership, racing and preservation of original and modified vehicles of all types. Members meet monthly and sponsor frequent club events and cruises. And certainly, they’ve been a great friend to SCCA’s Nebraska Region in many ways.

Throughout the week, SCCA supplies meals to the participants at Solo Nationals at the Monday and Wednesday evening shin-digs. But what do attendees do on the evenings without free food (and drinks!)? Many patronize the local Lincoln restaurants during their visit, but there are also numerous pop-up informal dinners throughout the paddock.

Tonight alone, the Central Carolinas and Atlanta Regions are smoking 6 large pork butts — about 50 pounds of meat — and are turning 12 gallons of tequila and margarita mix into the cocktail affectionately called “Trasharita.” The instigators of this gathering, Brian Hayes and Tim White, are the two most recent winners of the Roger Johnson Spirit of the Sport award, rewarding those who keep the sport fun, and about more than just competition. That award will be presented to its next recipient tomorrow night during the on-site Tire Rack Solo Awards Celebration.

Just a few rows back, another meal is taking shape thanks to the ladies and gentlemen of the Saginaw Valley Region (Michigan). Forty steaks are being prepared for dinner — along with all the “fixin’s” — that will be served alongside the newest Solo Nationals Paddock game – OsConeDa. A combination of cornhole, lawn darts and horseshoes using cones as the projectile, the game is already gaining popularity with tournaments held each evening.

While some are perennial favorites, new attractions pop up every year at Solo Nationals and it truly prompts the question, “what will they think of next?”

While there are a wide variety of flags flying over paddock at Solo Nationals this week, there is one in particular with a distinguished history. The flag flying over the East Course represents the 55th Wing of Air Combat Command and is a symbol of the Wing’s impressive service record.

The flag is a replica of the Wing’s flag which dates back to the Cold War. It was donated for the event by the 55th Wing Association. The Association is made up of individuals who served in the Wing and want to keep its history alive. After the conclusion of the 2021 Tire Rack SCCA Solo Nationals, the flag will be retired and hung in the 55th Wing’s museum.

The 55th Wing operates primarily out of the Offutt Air Force Base in Omaha, NE and has been active since 1948. The 55th specializes in airborne reconnaissance and electronic warfare utilizing a variety of aircraft, including the TC-135 which was parked in grid and made available for tours on Monday.

There are currently 18 airmen serving in the 55th Wing, making it one of the largest in the U.S. The SCCA would like to thank the 55th and all its former members for their generosity and hospitality towards our members, and for today’s flyover by the Boeing E-4 Nightwatch — one of four U.S. planes known as ‘Doomsday Planes.’

The fun continues from Lincoln with the 2021 Tire Rack SCCA Solo Nationals starting tomorrow, Tuesday, September 7. Follow along at scca.com, and on Facebook and Instagram with @sccaofficial.