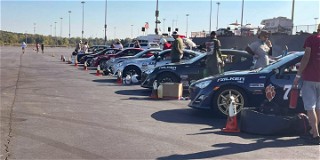 Even though the 2021 Tire Rack Solo Nationals is in the rearview mirror and national champions have been crowned for the year, the SCCA’s National Solo program kept rolling along Oct. 15-17 for the Tire Rack Charlotte Champ Tour at zMAX Dragway in Concord, North Carolina. Held just across the street from Charlotte Motor Speedway, this turned out to be the largest post-Nationals Solo event ever conducted by SCCA with nearly 200 entrants coming out to play.

A Look at Some Competition

The eight-entry Solo Spec Coupe class saw nothing but Scions this past weekend. Steven Hughes had a three-tenths lead over Stephen Tyszka on day one, and class newcomer William Bostic sat third in a new-to-him car. But Tyszka and Bostic swapped positions on day two with only a tenth separating the duo after second runs. Hughes coned on his final run and left the door open for Bostic or Tyszka to take the win. But neither could complete the task as Hughes held on by only 0.121 second over Bostic. Tyszka settled for third just 0.348 second behind the runner-up spot.

The same excitement was found in the five-driver Solo Spec Coupe Ladies battle. To onlookers it appeared as if Chris Peterson took herself out of contention on day one after not being able to produce a clean run. On day two, however, Peterson thundered back and made up her deficit with a single run that was 1.6 seconds faster than day one leader Nikki Edwards. Ultimately that gave Peterson the win over Edwards by 0.489 second. Molly Maxey finished third just 0.064 second off the pace of co-driver Edwards.

Street Touring Roadster had 11 competitors on hand at zMAX for what turned out to be a beautiful weekend for competition. Marcus Pyne and Mark Labbancz, both driving Mazda Miatas, traded positions at the top through day-one runs. By Saturday evening, Pyne held a three-tenths advantage on Labbancz, and Alan Claffie was sitting another two-tenths back in third after a strong showing in a car co-driven with Labbancz. Pyne extended his lead slightly Sunday to secure victory. Labbancz was runner-up a half-second back. Then it was Claffie third, and the final trophy position was occupied by Brett Hudson in a BMW M3.

A couple CAM classes combined for additional thrills during the weekend. In CAM-T, Berry Langley unveiled his third generation Chevrolet Camaro build. But it was Adam Schoonmaker and Alan Schoonmaker, co-driving a 1969 Chevrolet Camaro, who held the top two spots after day one. Langley fought back Sunday and was able to split the Schoonmakers, finishing second to Adam and edging out Alan by only 0.146 second. And in CAM-S, the eight-driver field was bested by Jeff Dobbins who has spent a full year rebuilding his Chevrolet Corvette Z06. Jon Nwanagu, in a Chevrolet Grandsport, took second only 0.840 second behind Dobbins; and Ryan Mathews took third in a Chevrolet Corvette.

SCCA’s National Solo season isn’t done yet! The next event on the schedule is a Nov. 5-7 visit to Naval Air Station Chase Field in Beeville, Texas, for the Tire Rack South Texas ProSolo. Registration for that event is currently open!

And don’t forget the Dec. 3-5 Tire Rack Axis vs Allies Champ Tour at Spence Field in Moultrie, Georgia − a site that has not been visited by an SCCA National Tour in over 25 years. Registration for that event opens Oct. 27.