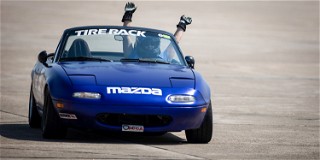 With more than 1,100 entries it’s no surprise a lot of awards were handed out during the 2021 Tire Rack Solo Nationals in Lincoln, Nebraska. You can review the first and second set of class champions, and a rundown of other special honors handed out. But, there's more!

A Few More To Announce

There are a few more tremendous performances that should be noted. First, there is the Fastest Time of Day (FTD) honor that went to Matthew Ellam, of SCCA’s San Francisco Region, who won the B Modified class driving a Omnifab Cheetah. Ellam earned that FTD award by posting a 92.106 total combined time, 3.329 seconds faster than the next fastest driver.

Additionally, Ellam took the Top Pax Award honors for the Thursday/Friday run days, with Jeff Kiesel, of SCCA’s Cal Club Region, claiming the honors on Tuesday/Wednesday with his E Modified KFR Turbo Sprite. To recognize their efforts, both Ellam and Kiesel received beautiful trophies in the form of custom-made Kiesel Guitars.

At the 1994 Solo Nationals, Lynne Rothney-Kozlak took a leap of faith and entered into open class competition. The Rotheney-Kozlak Cup was established in 2017 to recognize this moment, and to note Lynne’s decades of sustained open class participation and mentoring efforts to advance the skills of other women in Solo. This award is presented annually to the top finishing female driver participating in an open class at Solo Nationals. The recipient either has the widest margin of victory in an open class or is closest to the open class winner regardless of where she placed. The award had been won for three consecutive years by Tamra (Hunt) Krystinik, rendering her ineligible in 2021.

The 2021 Rothney-Kozlak Cup winner is Kim Whitener, of SCCA’s Texas Region, who drove her Mazda Miata to a seventh-place finish in a Street Touring Sport class filled with top-notch talent and 52 entrants.

“Sportsmanship Awards acknowledge a wide variety of exemplary behaviors,” Dobler said. “It can be someone who went out of their way to make Solo Nationals a better experience for all, a competitor who displayed fantastic camaraderie or selflessness, or even an individual who handled setbacks or adversity with grace. There were numerous wonderful nominations received this year, but the three winners selected stood out for being fantastic representatives of both the Solo community and Club as a whole.”

Each of the Sportsmanship Award winners gets to visit the SCCA Prize Closet filled with items from partners such as KONI Shock Absorbers, Summit Racing Equipment, Braille Battery, iRacing, Hawk Performance and ApexPro. Some of the goodies from which the honorees can pick include a set of KONI shocks, an E-Z Up, battery charger, or iRacing credits.

Please note the 2021 Driver of the Year and 2021 Rookie of the Year will be announced and recognized at a later date.