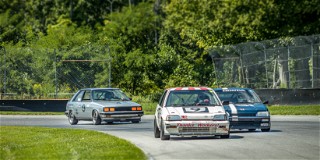 With the SCCA Enduro National Tour at Nelson Ledges Presented by Summit Racing Equipment just weeks away on May 20-22, 2022, it’s time to button up your tire strategy. After all, 16 hours of racing in two days can be quite demanding where the rubber meets the road. SCCA Enduro rules require the use of 200 UTQG (or higher) tires, and since Hankook not only makes a potent tire in that category, but also supports SCCA Enduro National Tour racers via a healthy contingency program, we contacted Danny van Dongen from Hankook Motorsports for a look at how to prepare for that green flag.

Tires wear at different rates depending on the racing circuit, car, driver, and more, so setting up for success comes down to choosing the correct tire pressures ahead of time. “On light cars like the Miata, they run around 34psi hot, and on heavier cars like BMWs and Mustangs, they run around 38psi,” von Dongen says of suggested tire pressures for the Hankook Ventus RS4.

Those pressures, however, are just a guideline for the RS4. To dial in the absolute correct pressure, a tire pyrometer is recommended. “There’s a really easy trick to see if you’re in the right tire pressure range,” von Dongen says. “Measure the temperature on the inside, the middle, and the outside [of the face of the tire]. The inside should be the hottest because of the camber, then the middle should be less, and the outside should be less again. There should be a spread of 15-20 degrees [across the face of the tire]. That’s what you’re looking for.”

It’s important, he notes, that the tire’s temperature is warm enough on the outside, because that means the entire surface of the tire is being used. If the middle has the highest temperature of the three, the tire is over inflated.

Targeting a hot tire pressure is a challenge because air pressures will increase as tire temperatures rise. “Most of the time, the tire will grow 8psi [from cold to hot],” von Dongen says. “If you’re aiming for 34psi hot, maybe start at 26psi cold – but that depends on the temperature, the track, and how many turns there are right to left.”

The crew’s and driver’s job is to maintain the peak tire pressure throughout the duration of the event. In traditional 30-45-minute SCCA sprint racing, tire pressures can be dialed in to fit one specific driver. If you know your driving style heats up the rear tires more than the fronts, you can compensate in pre-race tire prep or suspension setup. Enduros, meanwhile, see multiple drivers behind the wheel of the same race car with little ability to change the setup on the fly.

“I drive a lot of endurance races myself,” von Dongen explains. “I just got back from Dubai, where I did the Dubai 24 Hour. The team knows which driver is more aggressive on the front or the rear tires. The teams should know which drivers will drive more aggressively than the others and will see an increase in tire pressures.

“From that point, you always try to balance it out with the drivers,” he says. “Go over the data with all of the drivers, so you coach and balance the whole team.”

Ensuring a team’s endurance drivers know how to drive with a similar style is important because you never want to have to add air to the tires during a race. “You’ll want to bleed it down; you never want to add pressure,” he says.

In endurance racing, events can be won or lost by pit strategy. “Do you want to do a pitstop or not?” posits von Dongen. “You could drive one second off the pace and do the race on one or two sets of tires, or you could drive one second faster per lap and go through three sets of tires.” Von Dongen adds that he knows of teams that race for 24 hours on one set of Hankook RS4s.

Regardless of your tire budget, the race pace should be purposefully planned. “You don’t want to drive the tires off the car in the first few laps, because you have to do a stint of one-and-a-half or two hours,” he says. “You always have to keep in mind what you’re doing. Do I push it from the beginning? Sometimes you have to if you’ve got your competitor behind you or in front of you.”

If a driver pushes too hard during the race, the car may develop oversteer or understeer due to tire pressure creep causing the tire to balloon, restricting the available traction. At that point, the driver must rectify the issue on the fly. “If the car develops a lot of oversteer exiting the corner, be a little more gentle on the throttle and the temperature of the rear tires will go down and you will get your grip back again,” says von Dongen.

Did Someone Say Free Stuff?

Earlier in this article, we mentioned that Hankook has a contingency program for SCCA Enduro National Tour events. When tires are purchased through endurancetire.com, first-place finishers in each class receive two tires, second place earns one tire, and third place takes home a $50 certificate. Hawk Performance is another notable contingency sponsor, with first place receiving one axle set of brake pads, second earning a $100 certificate, and third place claiming an $80 certificate. You can read about Hawk’s endurance racing brake strategy here.