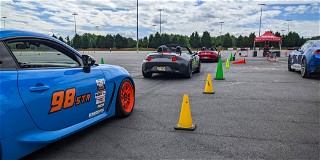 The 2021 Charlotte ProSolo weekend experienced what was described at the time as a “catastrophic failure in the timing and scoring system” that brought the event to an early conclusion and made some competitors question the program’s viability. The result was the 2021 ProSolo season being immediately postponed. One year later, we have great news!

A ProSolo Reset Team led by Brian Conners, with support from Myke Dziengel, Darrin DiSimo, Megan DePietro, Tracy Lewis, and others from the SCCA Solo field staff developed a plan for the 2022 ProSolo season. The timing system was tested and failure points were identified via a lab environment and real-world testing at autocross events.

Over nine weeks, the entire system was evaluated and verified for accuracy and reliability. The specific failure points that occurred at the 2021 Charlotte ProSolo were identified and protected against happening again.

One year and countless hours of work later, the 2022 Tire Rack SCCA Charlotte ProSolo demonstrated the improvements made to the system. The May 6-8, 2022, ProSolo at zMAX Dragway in Concord, NC, was the largest ProSolo event this season, with more than 200 entries – and the event ran at a pace that caught long time competitors by surprise. More than a few were late to their work assignments as the event was moving at a faster than expected pace.

“I can’t say enough about the efforts of the ProSolo Reset Team led by Brian Conners,” says Rick Myers, SCCA’s Director of Solo. “Their efforts have returned ProSolo events to the forefront of autocross competition. Weekly meetings, post-event deep dives, and utilizing practice runs as a means to verify that needed updates are functional as planned, have led to class competition running as smoothly as anyone can remember. While there is still some work to do on the Challenge portion of the ProSolo competition, most of the issues we are now seeing are from human errors and not failure of the timing system.”

A View From The Grid

“The 2021 ProSolo was obviously not the Club's finest hour,” says Jennifer Bedell, a North Carolina Region autocrosser who was onsite to compete in the 2021 Charlotte ProSolo. “We were in Group 1 grid waiting to run when they finally called off the event, and we were shocked. It was a more catastrophic systems failure than I had imagined could befall an autocross.”

The ensuing ProSolo 2021 season hiatus, she adds, was a disappointment after losing most of the 2020 competition season to COVID. “After a year of torturous uncertainty and cancellations, we had really been looking forward to getting back to racing, just to have the rug yanked out from under us again,” she says. “I struggled to understand why the SCCA was unable to roll the system back to where it had been at a more stable point in its past. Many of us were concerned that the SCCA would look to replace or retire the ProSolo series rather than fixing it, and I'm glad our fears were unfounded.”

During the 2022 Charlotte ProSolo, Bedell ran strong in Ladies Class 3, finishing third and battling hard in the Ladies Challenge – exactly what she’d hoped to do one year ago. “The [2022 Charlotte ProSolo] event ran smoothly and efficiently from a timing standpoint, which means everyone could go back to complaining about bathrooms and trash cans,” she jokes. “I'm just glad ProSolo is back.”

The coming weekend on the 2022 ProSolo Series calendar is the Tire Rack SCCA New Jersey ProSolo, which takes place at Meadowlands Sports Complex in East Rutherford, NJ, on May 20-22.

Speaking of points, at the halfway mark in the 2022 ProSolo season, the Johnson-Clark Johnson Cup points race is being led by G. Warren Hahn with 72 points. James Yom trails in second with 60 points, and Jonathan Lugod is tied for third with Matt Jones, both having 55 points.

The compete 2022 ProSolo Series points rundown can be found here.