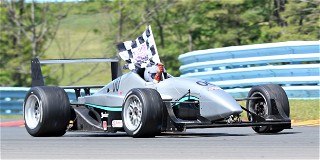 Small trailers and giant haulers have funneled through the exit tunnel, meaning the June 3-5, 2022, Hoosier Racing Tire SCCA Super Tour visit to Watkins Glen International (WGI) in New York has come to a close. As a result, a second set of race winners has been revealed across 25 classes.

Sunday races, hosted by SCCA’s Finger Lakes Region, were either 35 minutes or 14 laps in length. Each of the seven race groups faced WGI’s challenging 3.4-mile, 11-turn circuit. The weather was again fantastic, with temperatures in the low 70s most of the day, and a handful of puffy clouds floated by in the sky.

Atlantic Antics: Ahsen Yelkin won Saturday’s Formula Atlantic race in a Swift 014, and looked poised to repeat the feat Sunday. Then three laps into the race, he experienced some troubles and left the contest. That gifted the lead to Anthony Seaber in a Stohr F1000 racecar.

Seaber, however, couldn’t shake the Ralt RT 41 rocket driven by Mark Sherwood. Eventually, Sherwood took the lead and started to pull away. But the story doesn’t end there.

“We had them covered … and we were setting sail,” Sherwood said of his competition. “Then we picked up a miss in the engine that we’ve been chasing all weekend. In the end, the engine went sour.”

That left Seaber and Jeremy Hill, in the No. 00 Swift 014a, slugging it out for the win. Things looked to be going Seaber’s way, but then Hill got by and Seaber soon pulled off the track with an issue. Hill then went on to victory, and Sherwood limped home in the runner-up spot.

“We had some serious struggles this weekend and we couldn’t get the car to run at all,“ Hill said holding his first-place trophy. “We found most of the problems and worked through them.”

Charging Back in FE2: Against some stiff competition, Jason Conzo won Saturday’s Formula Enterprises 2 race in the No. 4 Motion Dynamics FE2 machine. In fact, he won by four seconds.

On Sunday, Conzo led 99.6 percent of the race and had a gap of nearly two seconds on the rest of the field at one point. But as the laps wound down, Charles Russell Turner closed in. It’s something Turner has a knack for doing in the No. 32 Southeast Spec Racer/PCS FE2 car. And in the last couple corners of the race, Turner pounced and took the victory after a fantastic last-lap battle.

“My plan wasn’t to get that far behind,” Turner said. “I didn’t expect Jason would have that fast of a pace early on, so I paced myself. Later on, every lap I just had to pick it up a little more and more each time. Finally, I got up to him.”

Change to Spec Racer Ford Gen3 Finish: Sunday’s Spec Racer Ford Gen3 (SRF3) race came down to Caleb Shrader, Sandy Satullo III and James Goughary. Shrader had led the entire second half of the race. But on the last lap, Goughary snuck by and reached the checkered flag first, followed by Satullo and Shrader.

After the race, however, stewards met and made a ruling that penalized Goughary two positions for contact and ‘racing room’ infractions. That resulted in the SRF3 win going to Satullo in the No. 07 DonateStuff.com car. Satullo also set a new track record in SRF3, which now stands at 2:04.357 around the 3.4-mile course.

More Records Fall at The Glen: With the absolutely fabulous weather all weekend, it should come as no surprise that Satullo was hardly the only driver to rewrite the SCCA record book at WGI. In Spec Miata, the new lap record is 2:14.099 set by Charles Mactutus. The Prototype 1 mark now sits at 1:40.544 thanks to Chip Romer, and Tim Minor holds the record now in Formula Continental with a 1:50.408 lap.

Charles Russell Turner owns the Formula Enterprises 2 lap record with a 1:49.832, and the GT-1 record of 1:49.476 now belongs to David Pintaric. Then there’s Touring 4 driver Marshall Mast, who reset that class record to 2:11.836, and Daniel Richardson who turned a 2:04.816 in American Sedan for a new record around the 11-turn circuit.

Winner Interview Videos: As always, the SCCA Road Racing Facebook page is where videos can be found featuring one-on-one interviews with several of Saturday’s Hoosier Super Tour winners from WGI. Victory podium broadcasts/videos from Sunday at WGI can be seen there, too, as well as interviews and victory circle celebrations from previous Hoosier Super Tour events.

The 67th running of the June Sprints will again take place on Road America’s 4.048-mile, 14-turn circuit found in Plymouth, WI. Driver and volunteer registration is now open for that amazing experience.