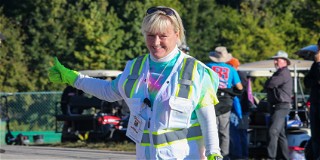 Washington DC Region worker Vanessa Farret had never attended the SCCA National Championship Runoffs before, let alone volunteered during SCCA’s weeklong road racing championship event – something she wanted to change. Thanks to an SCCA Women on Track (WoT) scholarship, Vanessa was presented with $500 to assist with her Runoffs expenses, suddenly making that trek a reality. Even then, she had no idea what the week held in store.

Things are never simple at the SCCA Runoffs – something this year’s Sept. 24-Oct. 2 Runoffs at VIRginia International Raceway took to heart. Weather challenged the event’s drivers, crew, and workers from day one, swinging from warm to pleasant to borderline insane as the remnants of Hurricane Ian blew through. Still, Vanessa had a blast.

“My highlight every day was going to work grid,” Vanessa explains of her weeklong adventure to the Alton, VA, racing circuit. “We had a lot of people from the Washington DC Region working, but I got a chance to meet so many other wonderful people from other Regions. We all had so much fun and made some great memories.”

The Runoffs is unlike any other weekend in the Summit Racing Equipment SCCA Road Racing season, be it due to scope and size, but Vanessa discovered that doesn’t mean the essence of the SCCA is lost.

“Being that the Runoffs is such a large event, I wasn't sure how the atmosphere would be in the paddock, but everybody was so friendly and just having a good time – it felt like one large family having a great week at the racetrack,” Vanessa recalls.

It turns out, it’s one large family that also recognizes its own. “My biggest surprise of the week was being awarded the SCCA Pit & Grid SCCA Worker of the Year Presented by Mazda award with my twin sister Valerie,” says Vanessa. “It's a huge honor for me to receive this award. It means a lot to know that we have made a difference and are able to support such an amazing Club. Thank you to those who nominated us.”

For Vanessa, the 2022 Runoffs wasn’t all about volunteering. Her boyfriend was competing in B-Spec, quite successfully. “The best part was my boyfriend Rich Hromin getting a podium finish – second place – in B-Spec,” she says, adding, “He has never raced at a Runoffs.”

This was all in addition to the SCCA Women on Track scholarship Vanessa had received prior to the Runoffs. “It was such an honor to receive the scholarship,” she says. “It will help to pay my lodging bills at VIR as it's expensive for 10 days.”

Will Vanessa be back? “I will definitely be attending the 2023 SCCA Runoffs,” she adds. “I had such an amazing time.”

How You Can Help

Many scholarships distributed by SCCA Women on Track are funded in association with the SCCA Foundation.

Tax deductible donations to the SCCA Foundation can be made through the Foundation’s website where, if desired, donations can be earmarked for specific programs.